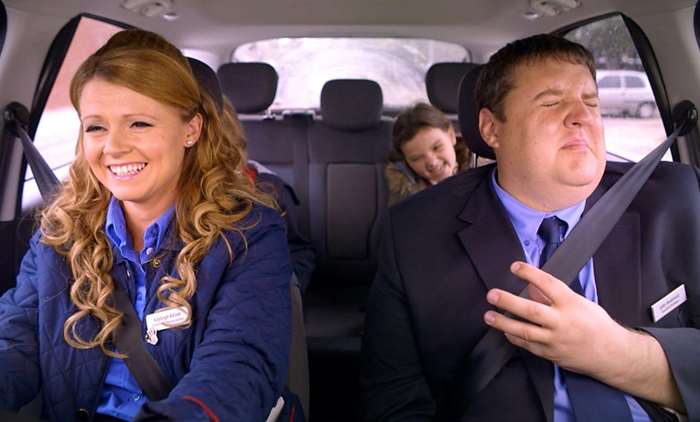 And in many ways coming up with a big idea for TV is just like getting creative in any workplace. So here are 5 big lessons in creative development that became really clear to me as I co-created and co-wrote the BAFTA winning sitcom, Car Share.

When a colleague and I were bouncing thoughts around, looking for a big sitcom idea, we were pretty pleased with ourselves when we thought about a car share scheme. But that was just the spark of a thought, not an idea. There are a thousand different roads we could have taken that down – 3 bankers and a hairdresser; the racing driver turned marketing manager and his OCD boss; the self-important car share scheme manager and her fleet of incompetent colleagues; the butcher, the baker and the selfie stick maker… you get the picture… But when we built the thought up… lets only see them in the car… on the way to and from work… lets make them a ‘men are from Mars’ bloke, and a ‘women are from Venus’ colleague… she’s flighty, chatty, chatty, he’s straight and likes his quiet time… Then it came to life. We could picture the scene, every scene, in our collective mind’s eye. And we loved it. We bounced it around between us, with childish, playful energy, laughing and writing, writing and laughing, until the first episode was landed. The lesson: Make sure your idea is a fully formed concept you can see in your mind’s eye, not just a theoretical thought.

If we had done things conventionally, we’d have stopped writing the first draft of Car Share after one episode. When pitching a sitcom idea, the normal route is to write up a synopsis – what’s the idea? who are the characters? what’s the style of the show? – and maybe write up a pilot episode script. We didn’t know that. And we were on a flow, in the groove, and we were having too much fun to stop. So we wrote the whole series. Six episodes. And I think it’s better for it. The characters, the storylines, the tone of the whole show was developed and crafted in 3 months as we ping-ponged the scripts between the two of us, and I’m sure that momentum helped us to keep it feeling real. The lesson: when the creative juices are flowing, don’t stop. Use your momentum to keep the energy behind the idea.

If you can find a creative partner that complements your style, that bounces positively off you, and you them, your thoughts will spark new thoughts off each other, and your partner’s suggestions will stimulate new sparks off you. And together you get an energy that soon becomes self-sustaining, self-generating. Your ideas become bigger and better; your thinking becomes quicker and sharper as you try and impress each other, amuse each other, and you get more expansive your thinking. But you get better at getting reductive too. When you need to trim the fat, lose the journey ideas, if you have a partner you trust, it’s much easier to do as a team. The lesson: creativity is a team sport.

Move your idea, or script, from the theoretical into the real as early in the process as you can. When my co-writer and I were writing Car Share we acted out our first few scenes in an imaginary car, made up of two kitchen chairs in a city centre apartment. It made us laugh, but also made us think of what John and Kayleigh would be doing in the car; how the physical act of driving would disrupt their chat; how they might fiddle with the radio, the mirrors, the glove box… stuff we might have missed if we just kept writing at our laptops. The lesson: rapid prototyping, acting out the idea, bringing your idea to life early in the process will help you refine, test and build it.

That’s pretty obvious for a TV comedy. But it’s just as true in innovation. I’ve run hundreds of idea workshops, brainstorms, suggest-fests… whatever you want to call them, and I recently had a bit of a revelation. There’s a moment in any ideas session when the energy changes, the creative juices start flowing and the ideas come thick and fast. And it’s when people start to laugh and have fun. And when people stop worrying ‘what if they laugh at my idea’ and start embracing the laughter. David Ogilvy, the advertising legend, said ‘The best ideas come as jokes, make your thinking as funny as possible’, and he was right. We laugh at things that surprise us, that feel a bit risky, and that shine a light on a truth. That’s what the best ideas do. The lesson: don’t be afraid to be funny. And if people start laughing at an idea in your workshop, see it as a sign that there’s a great idea in the room that needs landing.

I’m very lucky to work in both innovation and comedy. It’s a great double act. I find both areas give me the stimulus and energy to be better at the other. I’ve worked on several TV comedies and film projects now, and I’ve had the pleasure to learn from some wonderfully creative talent. Yes, there’s the odd small-minded, negative, coattail hanger (you know who your are), but for every one of those there are twenty big thinking, positively energizing, creatively inspiring people. And it can be a laugh.

My coaching days and training workshops in creativity and innovation explore how we can all up our creativity, learn from the comedy writer’s toolbox and have bigger, better ideas.