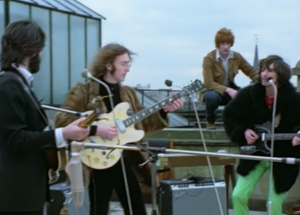 For a Beatles nerd like me, Peter Jackson’s Get Back series is pure joy. It’s like being invited to sit in and be part of the gang as they knock up their last masterpiece. It was filmed two months before I was born, so although I’m watching the young red-haired roadie, Kevin Harrington, make the teas, butter the toast and hang out at their rooftop gig and I’m thinking, ‘I could have done that. I could have been there’, it was never really on the cards.

Peter Jackson was tasked with taking the 60 hours of outtakes from the original Let It Be film and editing it down to a 2-hour film. It’s ended up as 8 hours because there’s just so much that he couldn’t bear to cut out. As a fan that’s a treat. As a piece of TV, it’s a bit flabby and he really should have tried harder. But Jackson’s a fan too, and he’s also the Director who made three long films out of The Hobbit. But I’m grateful for his lack of ruthlessness with the scissors.

The insight the three episodes gives us into the creative process is priceless. There is so much in here that we can all learn from. So many ways they show us how to create magic together; how to get, and keep, the creative juices flowing; how to spark off each other; how to allow starter thoughts to grow into magnificent ideas and creations. So here are my biggest observations, the 8 key things I think we can take away from those 8 glorious hours as creative lessons.

One of the big things that hits you straight away, watching the four of them working together, is how comfortable they are with getting it wrong. Just trying stuff and seeing what happens. It reminded me of the great Keith Richards quote. When he was asked how he comes up with so many great Rolling Stones riffs, he said “I just start playing until I make the right mistake.” On every track we see Paul, John, George or Ringo share the start of a new idea, the others just jump in and they start trying things, trying new things, tweaking, changing, relentlessly, until they land on a new idea or version that sticks. I try and do the same when writing comedy. And I always encourage teams to keep saying “what if…” and “how about…” when I’m running any ideas session.

It really struck me just how patient the four of them were, with each other, with the ideas, with their creative process. There were times when you’re watching the documentary when you’d think “oh they’ll ditch that idea in a minute, they’ll get fed up with it and try something else.” But they don’t. They give new thoughts and suggestions the time and space they need to grow.

And because they managed to maintain their trust in each other, they started to really have fun. It’s wonderful to see the four of them just have a laugh together, to share in-jokes, to laugh at the outside world. There’s a moment when the four of them mock a journalist and the article he’s written about their decline. It’s absolutely no coincidence that their collective creativity hits another level when they start having a laugh. The shared laughter unleashes any remaining creative constraints. I see it all the time in creative sessions. Laughter sets the imagination free. It stops us being afraid. Afraid of trying new things.  Afraid of how others will react. It bonds us as a group. You can see this in Get Back, all the way up to the rooftop gig. When The Beatles were having a laugh they were creating and performing to the very “toppermost of the poppermost”.

The most creative people know that you can’t wait for the perfect execution of the idea before you start to get working on it. Sometimes you just need to get started with what you’ve got. And if one bit isn’t quite right yet, don’t let that slow you down. Just improvise and let your subconscious fill in the blanks. The Beatles were past masters at this. And in Get Back you can see just how good they were at improvising. It’s well known that when Paul first had the tune for Yesterday, he didn’t have any words for it. So he filled in with “Scrambled eggs”. In this doc we get to see John Lennon encouraging the others to just “say whatever comes in to your head”. So, in Something, George sang “Something in the way she moves, attracts me like a pomegranate.”  In Two Of Us, John and Paul sang “You and me, Henry Cooper.” Sometimes just letting yourself improv, literally opening up your mouth and seeing what comes out, can be an incredibly potent and liberating way to create, to just see what’s lurking in your subconscious. It’s often where the genius is hiding.

There’s an often used saying by writers that writing is re-writing. No idea, script, song or poem is born fully formed. The first draft is always just an outline, a blueprint of the final version. The real work, and often the real value and quality, comes in the re-writes. And it’s such a gift to be able to see these four masters of their craft re-work and re-work with the patience and persistence that you don’t always credit any creative genius with. Whenever we see the final artwork, especially when it’s delivered effortlessly, it’s easy to forget that it’s so good because it has been worked and worked and worked.

I honestly think the magic ingredient in this particular creative venture was love. I’m not just talking about the love these friends clearly still had for each other (just watch how John and Paul look at each other as they work through Two Of Us, it’s utterly wonderful). I’m really talking about the love they all had for their fledgling ideas. Every time a new song was coming into being, whether it started as a note, a lyric, a riff, or a verse, it didn’t matter which one of them it came from, the four of them would take the care and patience of a new parent, to protect it as it found it’s feet, to feed it, to nurture it, to let it be what it could be. Never, in the whole 8 hours, did one of them say “that’s a bit shit” or  “I’ve heard it before” or “I don’t think our fans would like that.” The kind of idea killing that goes on in less effective creative sessions every day. No. Part of their genius, it’s now clear to see, was their instinct to protect and nurture, to love, their ideas as they had them.

They could also see when things weren’t going brilliantly. And it was clearly no coincidence that they only really got motoring creatively when they moved out of the large sterile studio in Twickenham and into a more comfortable, more intimate, tailor-made studio in their own Apple building in Savile Row. Here they felt safe, at home, more relaxed. So suddenly all four of them seemed to be more themselves, their individual personalities shone more brightly somehow. Getting the energy and environment right clearly made a big difference.

As a fan I could honestly watch all 8 hours of Peter Jackson’s epic edit on repeat. But I can’t I’ve got work to do. And I don’t have a red-haired roadie to knock me up some tea and toast. Right, better get back to it.